5.0 out of 5 stars
Highly recommend this coming of age surreal suspense thriller
Truly a spellbinding and exhilarating thrill ride of a young man’s journey through hell. Exploring literary as well as personal adventures of an existential crisis that ends in a murder, then we follow the young man on the run in one bizarre adventure after another. Combines genuine feeling and deeply moving experiences with the surreal, I’ve never read anything quite like E.I.E. before. - David

4.0 out of 5 stars
An open, honest and interesting work
I am still reading this book but here's my review anyway since Amazon is asking for it now. E I E mixes auto-biographical content with literary, musical and philosophical references. Like all good art it provokes a reaction, and that is sufficient for me to recommend it. However it did take me a while to get into the "chaos riddle prose" used by the author. - Nancy

5.0 out of 5 stars
Hypnotic
Hypnotic piece of trans-dimensional wayfaring from a visionary writer. - Keats


Black: Book One of the Story of Us All Trilogy -

5.0 out of 5 stars
Brilliant modern reinvention of old classics in new and profound ways
Black: Book One of the Story of Us All Trilogy is a brave new literary exploration, that is both very entertaining and provocative. Few works of modern literature take as many risks as this book does and is able to pull it off with the utmost success. Taking on the ambitious task of reinventing three classics from the past - the quest for the Holy Grail, the Divine Comedy, and the Faust legend - Hunter is able to completely flip the philosophical viewpoint of the old tales in new, surreal, and courageous ways. Not only is the text new and exhilarating but the book is adorned with beautiful abstract expressionist paintings, in full color in the interior as well as on the cover, by the great artist Eric Fiazi. You will simply not find another book out there like this anywhere. - David

4.0 out of 5 stars
This is a book that is erotic and sad and powerful and redemptive.
Derek Hunter has written a masterwork with his book, “BLACK - Book One of The Story Of Us Trilogy.” His use of ellipses between sentences, rather than commas, periods or the use of paragraphs, makes the book a beautiful dark poem to read and a narrative as well.
From the first words on the page, we are immediately drawn into the psychological world of the Nothing Man, a kind of modern-day Everyman, as he encounters everyone from God Himself, to archangels, Mephistopheles, Faust, and even Austin Osman Spare.
This is a book that is erotic and sad and powerful and redemptive.
It is a Holy Grail story tempered with a dash of Gnosticism where flawed modern characters look for their souls and spirits in a world that would steal both.
The Nothing Man searches for a silver chalice only to placate a rich and powerful man who is holding the Nothing Man’s son hostage in return for the chalice. But the story becomes so much more than that.
It is about a man who thinks he is unimportant who discovers how important he really is.
This book throws the old medieval idea of the Everyman, a typical, ordinary person, on its head; letting us know that, just like the Nothing Man, we are not nothing at all, but souls on a path to self-discovery. - Laurel

5.0 out of 5 stars
Excited for the rest of The Story of Us All
A visionary book! Bold in scope and on vision, Black is an amazing book that should be on everyone's shelf. - Eric

5.0 out of 5 stars
An excellent book with a unique psychological and philosophical story
I was drawn into the world of the Nothing Man, a modern-day Everyman, as he encounters everyone from God Himself, to archangels, Mephistopheles, and Faust. Looking forward to the following books of this trilogy. - Zan

5.0 out of 5 stars
Breathtaking exploration of 18 different characters in 18 short stories
Roller coaster rides from story to story, that explore a wide variety of experiences and lifestyles, some in a romantic comedy vein, some satire, all written in a surrealistic style the author calls Chaos riddle prose. Each character plunges into a truly unique tale you will never forget. All 18 tales offer something different, something beautiful. - David

5.0 out of 5 stars
Strong personal statement framed as a murder mystery
An autobiographical novel about a young man’s struggles to find himself in the modern world, finding meaningful relationships with friends, lovers and more, all written as a personal testament to his yet to be born son and framed as a murder mystery. The tale actually begins with the lead character’s murder and we follow his testament as a means to find out who the killer was. - David

5.0 out of 5 stars
A great read!
This is a beautifully written book that is compelling and draws you in. I highly recommend it as a really great read. - Zan

5.0 out of 5 stars
Haunting!
A new take on the autobiography that deems further exploration by contemporary writers. Quite inventive, personal and endearing whilst being rather entertaining and suspenseful! - Keats

The novel, E.I.E.,  was also reviewed at Kirkus Reviews and on Goodreads.

To go to the book's review on the Kirkus Reviews site,
click HERE


To go to the reviews on Goodreads for not only E.I.E., but also Love Chaos, Black Light White Dark and Life,
​click HERE


​Below one can find the text of the review at Kirkus Reviews:

"A cerebral drifter makes sense out of the madness in his life in this debut novel.
​
Robert Robillard, a 23-year-old self-styled artist whose mind moves a mile a minute, is considering suicide but decides to just leave Los Angeles instead. He begins a metaphysical journey around the American Southwest, pondering such heady topics as life, death, morality, and existence while experimenting with a few trespasses against the laws of God and humanity. He gets caught stealing and is forced to murder his way out of the situation, only to be filled with intense remorse and fear over the deaths of the two people he’s killed: “I was now a murderer and it would forever weigh and sit and hang over who I was and who I was to be.”

Robillard’s ruminations on the nature of freedom and expression—which were previously largely philosophical exercises—take on a new urgency as he seeks to escape punishment for his crimes and settle his affairs before fleeing to Montreal to live under a new identity. To do so, he’ll have to make peace with the person his actions have forced him to become—and escape the vengeance of the father of his victims.

Robillard narrates the book in an ellipses-laden, Joycean stream-of-consciousness style that Hunter calls Chaos Riddle Prose: “Shoe to killer in Connecticut … with Wet Fingers Worth of Worthiness … palms to sheiks … forehead feigned the Fool! … Touch do not! … Orion the Ore my Marina the Music! … The Music of the Spheres!” It’s a bit hard to follow, as Robillard leaps from literary reference to pun to onomatopoeic description of something happening right in front of him.

Hunter’s obvious debt to various modernists feels more than a bit mannered now that Joyce’s APortrait of the Artist as a Young Man is a hundred years old. That said, there is something inherently compelling about a book that forces the reader to experience it on its own terms, and this is one such work. Hunter has created a surreally inviting wasteland in which to stage this morality play. 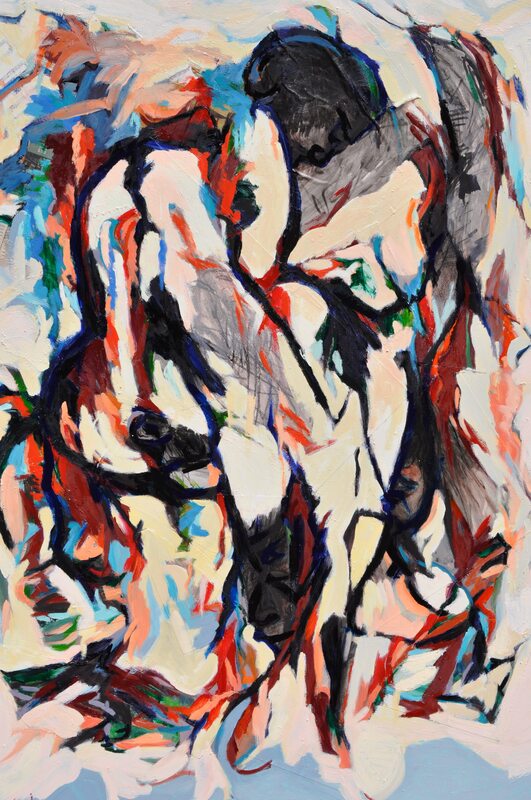